Electrophoresis is a widely used technique in molecular biology. Using an electrical field, molecules are separated, usually by size, in a gel matrix. Electrophoresis can be used on a huge range of biological molecules, but is more prominently used with DNA and Proteins. Our electrophoresis gel tanks consist of 3 main components:

There are slight differences in the electrophoresis tank designs used for DNA and Protein, and each uses a different type of gel. 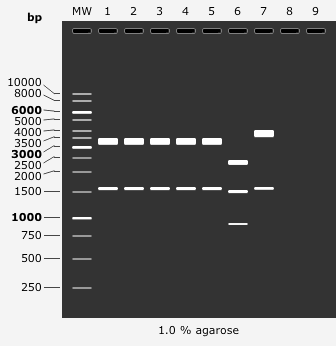 DNA is negatively charged due to the phosphate groups of the structural backbone of the molecule. This means that when DNA is exposed to an electrical field in conductive buffer, it will move towards the positive electrode of the system. Without any resistance, this would lead to a rapid and disorganized flow of DNA through the buffer. To organise the movement of the DNA, we introduce a separation matrix, made of a sugar called agarose. By melting agarose powder, dissolving it in conductive buffer and allowing it to set, a semi-solid gel is formed. This gel contains microscopic pores, present due to the loose cross-linking of the agarose. The pores block the migration of the DNA, slowing down large molecules more than smaller ones. When the DNA is visualised using fluorescent or visible stains, this resistance results in a distinctive pattern of bands associated with DNA of different lengths.

Our Agarose gel tanks are suitable for use in routine agarose gel electrophoresis, and come in a range of sizes for different sample number and resolution lengths.

Proteins are not uniformly charged like DNA. Some proteins can be positively charge while other can be negatively charged. This makes electrophoresis of proteins more complicated. To get around this limitation, a detergent called Sodiuim dodecyl sulfate (SDS) can be used. SDS acts as a surfactant, covering any native charge of the protein and creating a uniformly negative mass-to-charge ratio. This also disrupts the proteins structure, leaving it in a linear state. Using SDS with polyacrylamide gel electrophoresis is known as SDS-PAGE.

Proteins are also generally much smaller than DNA, which means that the large pore size of agarose gel is not suitable for separating them. Instead, a cross-linked polymer of acrylamide and bis-acrylamide is used. Generally this mixture is cast vertically, between 2 glass plates. This allows the use of a “stacking” gel which concentrates the proteins at the start of the gel, improving resolution.


Our vertical proteins electrophoresis tanks are perfect for routine SDS-PAGE. Each tank comes with glass plates and a leak free casting system to simplify the casting process. Our mini tanks also work with all available pre-cast polyacrylamide gels.

Our Product catalogue is available to view online. For all ordering enquiries please use the contact page. Dismiss